Time for a candy break! I got my hands on some (non-replicated) Star Trek: The Next Generation "Photon Candies" from 1992. Every time I think that the Trek franchise has been woefully negligent in the promotional food department I stumble across a Star Trek Cereal or a Star Trek chocolate bar...and it feels good. 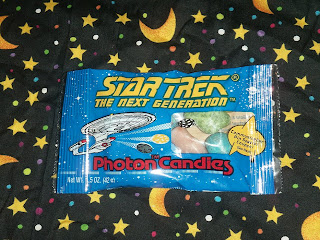 As usually, I'm a little hesitant to eat 18 year old candy but after a quick visual inspection they look like your standard jelly bean/jellied candy, but for some reason they went with the "rock" motif (not unlike the Krypton Rock Gum from awhile back).

Also odd is that the two themes ("photon torpedo" and "rock") hardly seem to be two great tastes that taste great together. The packaging suggests that the Enterprise shoots these rock candies the same way they would shoot photon torpedoes. Now I'm no canonista but I don't think even season 1 of TNG would dare attempt such a wacky turn of events. 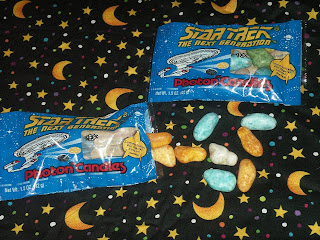 Like all good candy this came with a mail away offer on the back. For only $7.50 you could have owned your very own combadge and a mere tap would be all you needed to be beamed away from even the most precarious away missions. 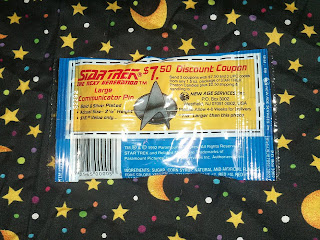 If I were prone to negativity I might say this just seems like a previous candy line haphazardly repackaged and slapped with a brand name franchise label in order to make a quick buck. However I choose to see it as a high concept re-imagining of a Star Trek universe where the ships shoot candy rocks at their enemies. Take that Klingons!

Chalk this one up to yet another novelty candy that came and went, leaving more questions than answers.
Posted by Todd Kent at 2:09 PM 1 comment:

I was recently interviewed (along with Josh Elder of "Reading With Pictures") on Fanboy Radio. Click below to hear it! 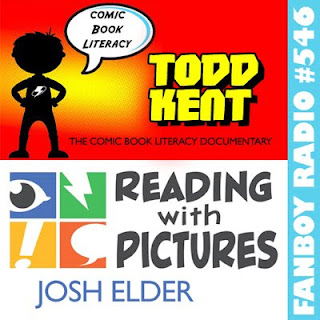 It may be hard to believe but there was a time when I had never read a comic book. But there is a first time for everything and my first comic was a doozy. 1983 gave the world Dexy's Midnight Runners, Scarface and the so-called Video Game Crash of '83.

But more importantly for me, 1983 was the year I finally got my grubby little hands on the first comic book I ever read: "The Uncanny X-Men at the State Fair of Texas." 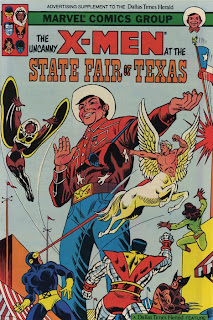 Sure it might not be Watchmen or The Dark Knight Returns but it had one thing that those two groundbreaking comics didn't...accessibility.

Now I'm not talking about being bogged down with continuity or mega-crossover nonsense. I'm talking about physical accessibility. This issue came as a free supplement to the (now defunct) Dallas Times Herald newspaper. There's nothing better than having your first comic delivered right to your door.

Another accessible element for a seven year old super hero enthusiast residing in rural Texas was the setting: The State Fair of Texas. Now, I know what a lot of you may be thinking (particularly those of you that don't live in Texas), "State Fair? Sure, we have one of those I think."

No you don't. Not like we do. The State Fair of Texas is more than a party and more than a festival. Here, it's an institution. And to date, it's the only fair visited by the Uncanny X-Men.

By now you may have noticed the giant cowboy statue that seems prevalent. That's "Big Tex," the fair's mascot, goodwill ambassador and, by the end of the story, unofficial X-Man. Every October he is constructed just before the fair begins and a few years ago we shot footage of the process for the TV show "North Texas Explorer." Here's your Big Tex/State Fair crash course:

That little tidbit of information will undoubtedly help you appreciate the majesty that is "The Uncanny X-Men at the State Fair of Texas."

Written by Jim Salicrup (plot) and David Kraft (script), with art by Kerry Gammil & Alan Kupperberg (pencils) and Chic Stone (inks), the story is a pretty basic X-Men tale. Magneto is trying to recruit a young mutant in Dallas and Professor Xavier and the X-Men must race to stop him. So off to the fair they go. 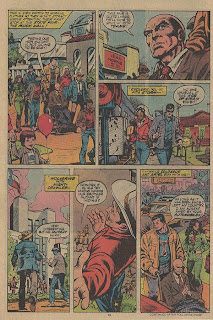 Even though they are in a rush to find the new mutant they seem to find time to hit the fair's highlights including the Auto Show, Hall of State, Age of Steam Museum and a concert performance by Lena Horne. Even at a young age I recall thinking of it as a bit of a hard sell:

As much as the X-Men were plugging the the sights, sounds and tastes of the fair to the reader, Magneto was pushing membership to the Brotherhood to the young mutant Daniel (a.k.a. "Eques"). It seems that Daniel's mutant power allows him to turn halfway into a horse with wings (I forget what that's called).

Magneto's plan to woo the young horse boy involves filling him up with corn dogs and cotton candy and treating him to the Texas/OU game at the Cotton Bowl where the X-Men finally catch up to him. 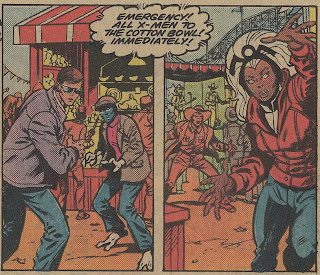 Their fight spills over into the horse barns where Magneto reveals his true douchey colors and Daniel realizes he's been manipulated by smooth talking and deep fried treats. Daniel joins forces with the X-Men along with another new friend who helps give Magneto the boot. 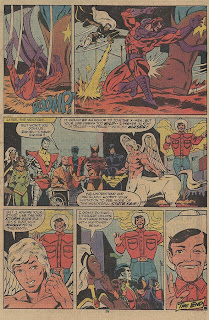 So while Daniel doesn't immediately sign up for X-duty we can assume that everything works out for him and the fair continued with a minimum of super powered altercations.

So like I said, while it's your standard "race to recruit a new mutant before Magneto does" X-Men story, the best part of reading an older comic like this is the advertisements. Since this had a regional audience in mind most of the ads were for local businesses. To make them more "comic booky," a crudely drawn Spider-Man (or Hulk) was typically crammed into each ad. Here are just a few: 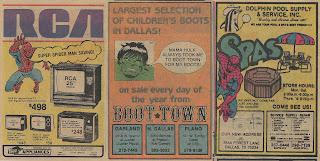 My first comic and I were separated over the last few decades but were recently reunited via eBay. And while the influence of nostalgia has probably colored my perception, I still had a good time rereading it. It's definitely not the best comic book I ever read but it holds a special place in the long box of my heart. And more importantly it was a first step toward developing a love of reading through comics.
Posted by Todd Kent at 8:50 AM 1 comment:

Todd Kent
Dallas, TX, United States
I am an independent documentary filmmaker. My work ranges from educational to goofy.

Past documentary projects I have worked on include "Comic Book Literacy", "Fast Food" (following the wild & wacky exploits of product mobiles like the Oscar Mayer Wienermobile & more!) and earth science educational documentaries like "Oklahoma Rocks!" and "RockHounds: The Movie."